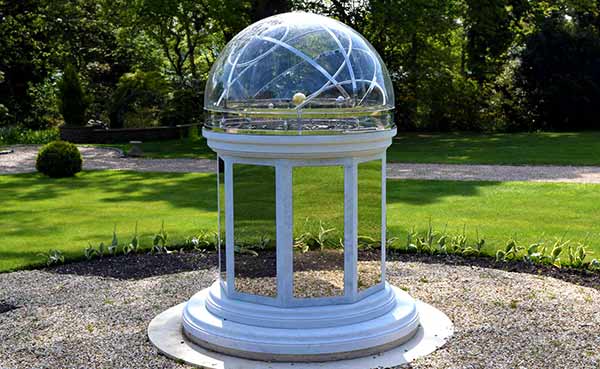 An orrery is a mechanical model of the solar system first devised in classical Greece. Like the original, David Harber's contemporary reworking demonstrates the daily dance of the planets and our moon around the sun but adds an aesthetically pleasing and intellectually accessible aspect to the original by allowing the observer to enjoy the beauty and watch-like precision of the mechanism.

By slowly rotating a handle, the carousel-like dance of the planets inside the orrery begins: the bronze earth rotates on its inclined axis of 23½ degrees; the moon accurately rises and lowers as it orbits the earth; and the other planets faithfully follow their own path through space and time.

The 1.2m diameter piece is made from marine-grade stainless steel with an illuminated gilded glass orb representing the sun at its centre. An armillary sphere encases the mechanism and a clear, removable cover protects the piece from harsh weather.

A date ring at the outer edge of the mechanism has been designed to last 500 years. This can then be turned over so the next 500 years are revealed, conveying the enormity of the story that is the solar system and its workings.